Lugar Center: Fitzpatrick Ranked As Most Bipartisan Member of Congress

This Bucks County Republican set a new record for bipartisanship in 2019.

Rep. Brian Fitzpatrick (R-Bucks) ranked as the most bipartisan member of the U.S. House in the first year of the 116th Congress and broke the previous all-time bipartisan score, according to the Bipartisan Index from the Lugar Center and the McCourt School of Public Policy at Georgetown University.

“In 2019, Rep. Brian Fitzpatrick earned the highest Bipartisan Index score we have ever recorded by a House member,” said Dan Diller, Policy Director, The Lugar Center, Georgetown University. “Leading the House with a record score is all the more notable in a year when 57% of his House colleagues scored below the historical average and hyper-partisan politics frequently grips Washington.”

Diller also described Fitzpatrick as “consistent” for working with Democrats on legislation and pointed to the Bipartisan Index score from the previous Congress from 2017-2018 when he finished in second place, only trailing Rep. Ileana Ros-Lehtinen (R-FL), who has since retired.

Fitzpatrick issued a statement describing bipartisanship as the “only remedy” to help the nation.

Below is the bipartisan rankings for the entire PA House Delegation in 2019 for the 437 House members scored. 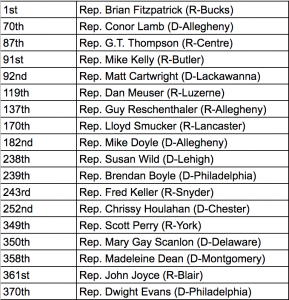